Imagine your investment accounts being supervised entirely by automation. 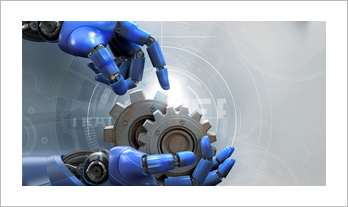 Instead of meeting with a financial advisor to review your investment strategy, you sit in front of your computer and answer a few questions about yourself. Then, you link your financial accounts to the system. A bunch of snazzy pie charts and bar charts appear on your computer screen. You’re all set. Go enjoy life. The system will trade stocks and bonds for you. And it won’t get tripped up by emotion. It knows your goals, accounts for your risk tolerance and uses computer algorithms and market data to make smart trades.

Now if automation can do that, I’m out of a job, right? You wouldn’t need to come to my cozy office. You may even save some money. Let’s see.

Ready to hand a workbot your money?

Automation is spreading to places no one ever thought possible. According to Wired (“Robots Take Over!”, Jan. 2013) robots can play the violin and improvise as they play. Robots can paint. They can serve as personal trainers. They can take your meal order, deliver your food and entertain you as you dine.

Wired says that by 2099 a full 70 percent of today’s occupations will be replaced by automation. Here is the predicted order of replacement of today’s workforce: First, factory assembly line workers. Next, warehouse workers. Then, vegetable and fruit pickers, pharmacy pill-dispensers, office and school cleaners and long-haul truck drivers.

You can buy a robot today for $22,000. His name is Baxter, an industrial workbot from Rethink Robotics. Park him on an assembly line. Wired says he can work with a wide range of objects.

Even though Baxter has cartoon eyes, he knows how to fit in with others. Using sonar, he has the ability to perceive humans working nearby, and can acknowledge the presence of others with a nod, in a manner of speaking. Whereas previous generations of robots were dangerous to be around, the latest designs are team-friendly. Baxter, Wired says, “is courteous.”

Ready to hand Baxter your money and let him manage it? Don’t trust a workbot with your wealth planning just yet? How about computer algorithms?

According to The Wall Street Journal (“How to Get Investment Advice for Less Online,” Sep. 4, 2013), “a group of mostly startup companies … now offer services that use computer algorithms to suggest and in some cases oversee [investment] portfolios.” The article says it’s a “nascent but fast-growing industry.”

Many of the services aim to act just like an investment advisor. They say they can evaluate your investments, advise you on strategy and manage money for you.

Some even offer tax-loss harvesting, which is a way to sell some money-losing securities so as to offset taxable gains you may have in your portfolio. Whereas I would work closely with your CPA or other tax advisor, online planners somehow build such sophistication into their systems. Or, so I understand.

I can’t speak to the degree of effectiveness (or ineffectiveness) of any of such services. But some people are willing to give them a try even though, as The Journal says, “many of these tools don’t consider [one’s] overall financial life.”

Hence, we are seeing the rise of automation. “Software is eating the world,” said venture capitalist Marc Andreessen in Wired (“The Man Who Knows What’s Next,” May 2012). Andreessen says that the financial services industry is next, after education, to get an overhaul.

Now, whether a piece of automation — a robot or computer code — can buy and sell stocks is one thing. Taking a holistic view of a person’s life and tailoring a meaningful and actionable wealth plan to fit that precise person’s goals and needs is quite another.

And then there’s the biggest challenge of all, working through times of crises and market turmoil. Can a robot provide comfort, encouragement and empathy when those things are most needed?

There’s a computer scientist and author, Jaron Lanier, who recently wrote a piece for The New York Times. In “Fixing the Digital Economy,” Lanier reminds us of something that for some reason isn’t quite so obvious.

“All forms of automation ultimately rely on data that come from people, however. There is no magical ‘artificial intelligence,” Lanier says. “When a big, remote computer translates a document from English to Spanish, for instance, it doesn’t understand what it is doing. It is only mashing up earlier translations created by real people, who have been forgotten because of the theater of the Internet. There are always real people behind the curtain.”

Certainly, technology can help make for a somewhat better world today. But, I’m not so sure that it can manage a person’s wealth all on its own. Not yet. Maybe by 2099.